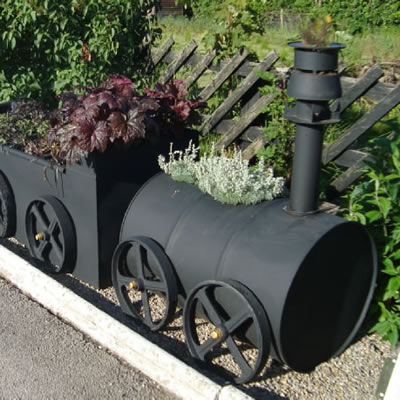 Since 2004, Hutton Cranswick in Bloom has worked in partnership with the Train Operating Company to improve Hutton Cranswick Station Gardens. In 2009, following the redevelopment of the engine shed into residential properties, the In Bloomers, in agreement with Northern Rail, took over responsibility for the whole garden area of the Scarborough platform.

In 2010, following Yorkshire in Bloom guidelines for sustainable planting, the large semi-circular bed at the entrance to the Scarborough platform, was redesigned as a scree bed displaying Sedums. Previously the area had contained a number of barrels.

In 2010, Village in Bloom members began replacing barrels on the Hull platform. Three raised beds were planted up at the far end of the platform. Again, the emphasis was on permanent planting.

In  2011, an ambitious project to replace further barrels with a replica train was completed. The train was constructed by Glynis and Alan Jenner from recycled materials donated by villagers or collected by ViB members.